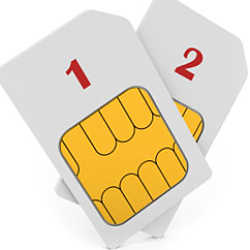 Have you ever found yourself with two separate mobile phones or one phone but two SIM cards ?

Similarly, perhaps one mobile phone but two SIM cards - again one for work, or business use, and the other SIM card for private or personal use.

In this article brought to you by SIMsurprise.co.uk we give you a brief introduction to the concept of Dual SIM Mobile Phones.

What is a dual SIM Phone ?

A dual SIM Mobile Phone is simply as the phrase sounds - a single mobile phone with the facility to switch between two different SIM cards.

In their early development, an adapter containing two SIM cards would be attached to a "standard" Mobile Phone so that two SIM cards could be used without physically removing one SIM card and then inserting the alternative SIM card.

While one SIM card was in use, or active, the other SIM card would be inactive - or in Standby.

This is referred to as a Standby Dual SIM Phone. The currently un-used SIM card itself can be referred to as the Standby SIM, or sometimes as the Ghost SIM.

As technology has progressed it is now possible to physically place two SIM cards within your single Mobile Phone handset.

Both SIM cards can be active simultaneously. In this example - both SIM cards are continuously active - both are available to receive calls or text messages.

This is referred to as an Active Dual SIM Phone.

Several types of adapter are available on the market - to go into any great depth of detail on each and every one of them is beyond the scope of this article. We will however explain the general concept of operation.

Possibly the most versatile of the two types of Dual SIM Phones.

This type of Mobile Phone has extra circuitry built into it, which does not add a great deal of extra weight or size to your Mobile Phone - such is the advancement of micro technology.

The added circuitry, in effect, produces two Mobile Phones within one casing - sharing some common features, such as the battery - so two phones in one, but not necessarily twice the physical size of one phone.

One drawback of early Active Dual Sim Phones is that the battery life was shortened because, in effect, the battery had to support two phones.

This has been overcome by increasing the size of the battery.

Active Dual SIM phones allow calls to be received on either phone number (each SIM card will have its own unique phone number) at any time, so long as an active call is not in progress on that specific SIM card, and hence phone number, at the time the call is being made.

So, a caller can call you on either your business number or personal number at any time and you will receive the call without having to do anything to your SIM cards.

Full control of which SIM card you are to use to make a call, or send a text message, is typically carried out by means of a menu system, similar to the menu system that perhaps you are already familiar with in terms of accessing messages, contacts, clock (time and date), etc.

Both SIM cards may or may not be connected to the same Network - they can be the same network, or two different networks - your phone, your use - your choice.

Perhaps the option of a contract calling plan on one SIM card and a Pay As You Go (PAYG) plan on the alternative SIM card might be a feasible option for some users who perhaps might want to share their handset with another household or workplace member.

Perhaps contract for your business number and Pay As You Go for your personal calls.

The combination options might be only limited to your own ideas and situation.

At the time of writing this article, the author is able to think of one major disadvantage.

The first mobile phones were large, heavy, and perhaps cumbersome - however they were a useful technological step in their day, even if the only time you will see them now is when visiting your museum.

In perhaps just a few years will the Dual SIM phones of now be museum pieces ?

Tri-SIM (triple-SIM) devices are already being developed and put onto the market where your mobile phone, or PDA, can have three SIM cards.

If you have a dual, or triple, SIM phone handset you can use your handset with your business SIM card and your personal / private SIM card - simply swap between SIM card as appropriate.