The intention of this article brought to you by SIMsurprise.co.uk is to explain a little about radiation and the potential impact that Mobile Phones can have on radiation related issues.

This article is not intended as a thesis for a doctorate, or even a much lesser degree, so my apologies now if such an in-depth article is what is expected.

The author's intention is to keep this explanation relatively simple.

Radiation is the transfer of energy through the air in the form of particles or waves.

What kind of radiation do Mobile Phones use ?

Mobile phones use radio waves and signals transmitted through the air.

Also, the construction and density of the object has an effect on penetration ability - for example paper, wood, brick / stone, or steel. Thin or thick - fractions of an inch, inches, or feet thick.

However, this does not make Mobile Phone radiation unique - x-rays, radar waves, television waves, and other perhaps more "conventional" radio waves - such as those used to receive your local radio station are in the air around us all day, everyday, everywhere - in our home, office, in the street, in our car, in the bus, on the train - as well as the radio waves used to transmit Mobile Phone messages and calls.

Are there Health Risks associated with Mobile Phone Radiation ? 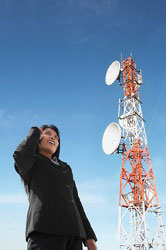 Official research and studies give conflicting results, but in the opinion of the author, isolating ourselves from such radiation is virtually an impossibility.

Does it actually have a risk ?

Again - research is conflicting as to whether or not any harm is done, and if so, how much harm - there are hundreds of ifs, buts, and variables.

When non-conflicting research substantiates, or proves, harm, it is the author's opinion that Governments will legislate rather than rely on voluntary codes of practice for Mobile Service Providers and Mobile Phone manufacturers.

What precautions can be taken if concerned about mobile phone radiation ?

If we spend too much time in the sun - we get sunburned - yet avoiding the sun completely can have a negative effect.

Sunlight is essential for the body to produce Vitamin D.

What the author is saying here is that while there are possible risks, we can still enjoy the benefits of what is available to us without exposing ourselves to excessive danger.

If you are concerned about possible radiation effects, the following steps can be taken:

Research into the effects of mobile phone radiation has been somewhat contradictory.

Using your Mobile Phone in moderation, and taking precautions if concerned about the effects of radiation, will help you to make the most of your Mobile Phone without letting conflicting research and reports effect your enjoyment.

There is a paperback book available Impress Your Cat: Know About Mobile Phones and Their Safety which may be found interesting and informative.

The book includes an explanation of how a typical mobile phone system works and discusses some future trends.