This article brought to you by SIMsurprise.co.uk is an expansion to our article: Real or Virtual.

What determines whether the network is Virtual or not ?

Firstly, perhaps most significantly, a Mobile Network Operator, for example: Orange, Vodafone, O2, T-Mobile, will be licensed to operate mobile telephone services over a range of frequencies within the Radio Frequency spectrum. These are the frequencies which carry your calls and texts through the airwaves.

Each area, country, or region, has its own regulatory and licensing body which regulates and licenses users within their territorial limits.

A Mobile Network Operator will normally have the entire infrastructure required, hardware and administrative, to operate a Mobile Phone Network. Although as you will read further on, certain aspects such as administration may be contracted out – or outsourced.

By hardware we refer to the masts, transmitters, wires, switches. By administration – we refer to Marketing, Branding, Billing, Operational Support, and Business Support.

In contrast, the first “making” of a Mobile Virtual Network Operator is that the MVNO will not be licensed to operate over a range of frequencies.

What is an MVNE or MVNA ?

An MVNA and an MVNE, instead, offer a degree of infrastructure and related services to the MVNO.

Some Mobile Virtual Network Operators want to have full control and ownership of their Operation and Business Support Systems, such as and including billing.

Another Mobile Virtual Network Operator will want no direct ownership or control over their Operation and Business Support Systems (was that a gasp I hear? - read why later!), other MVNOs however will want something in between full ownership and no ownership – this is exactly where the MVNE and MVNA come into their league.

An MVNE and an MVNE can also be the businesses who buy wholesale minutes from the host network and then sell them on to MVNOs – each MNVA and MVNE can be, and usually are, associated with more than one MVNO and more than one MNO.

Therefore the MVNE and MVNA can buy wholesale minutes in higher, more economical, bulk buys from MNOs – than individual MVNOs

Earlier when mentioning that some MVNOs want no, or only part, direct ownership or control over their Operational and Business Support Systems – one benefit of utilising an MVNE, or MVNA, is that these two providers can help the MVNO to defer capital expenditure and provide cost reductions.

For an MVNO to install and implement such tasks as billing would be an incredibly expensive task – so this can be outsourced to an MVNE or MVNA which will already have such systems installed and operational in every way – hardware, software, and staff.

All that will be required on the part of the MVNA or MVNE will be adjustments to software packages that will be adjusted to individual MVNOs – a minor task compared to setting up, and de-bugging an entire billing system from scratch.

If an MVNO were to use the Host network for masts, transmitters and switching, while outsourcing everything else to an MVNE or MVNA – this will leave the MVNO to focus purely on promoting (Marketing) their own brand (promoting “their” network), and developing Customer Relations – that is concentrating on dealing with their customers – You and I .

So the good thing for the MVNO is that the initial outlay is a lot lower than if they were to invest in in-house billing systems for example, and the benefit for You and I is that we have our calls to Customer Support answered quicker and better, in theory at least, because the staff and their managers are all perhaps “doing what they do best” – focusing their financial and time resources on helping their network customers rather than sorting out billing platform issues for example.

Now is perhaps the place to introduce a subtle difference between MVNAs and MVNEs.

Either an MVNA or an MVNE can liaise with an MVNO, and offer the services described above.

Typically when a person, or company, wants to develop an MVNO they will approach either an MVNE or an MVNA as a broker, or middleman, between themselves and an MNO by providing such platforms as billing.

The future of MVNOs and MVNEs

Where a MVNO uses a MNO as a host, for example Virgin Mobile operates as a MVNO using the MNO T-Mobile – Virgin is a branded network using T-Mobile.

All Virgin Mobile calls and texts are routed through T-Mobile masts and transmitters.

Any one MNO could have deals with any number of MVNOs.

Each MVNO on the same MNO may each have a small number of subscribers.

Economically it would be better for the MNO to have fewer MVNOs each with a large subscriber base.

MNOs perhaps recognize that individually, smaller MVNOs are not economically viable to accept onto their network, but collectively the economics make them attractive.

This is perhaps where the MVNA is becoming differentiated from the MVNE.

Therefore the MVNA will perhaps develop further than their current similarity with an MVNE and become more of a gatherer (aggregator) than an MVNE who will perhaps remain simply Enablers. 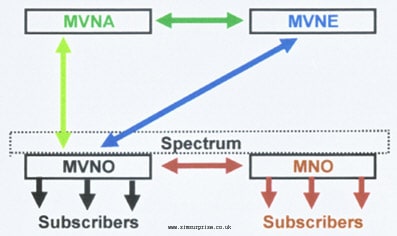 The diagram to the left gives a visual representation of the relationships between an MVNA, MVNE, MVNO and a MNO and subscribers.

Our article PAYG Billing explains the concept of billing and charging platforms.

For images, hints and tips on New Zealand postage stamps and philately, visit . . .